Evolutionary Propaganda: Coming to a Theater Near You

Earlier this week Disney/Pixar revealed the first trailer for their upcoming movie The Good Dinosaur. Due out in theaters Thanksgiving weekend, it will no doubt be a hit among families, as Pixar has been the gold standard for family-friendly movies since launching Toy Story in the mid-90s. And, it will be especially popular with children because – “Dinosaurs!!!” Unfortunately, as is always the case with dinosaur movies, you know what that means.
The brief video introduced the premise of the film, basically exploring the idea “What if that supposed meteor never hit the earth and gasp humans and dinosaurs actually lived together!” In the first 5 seconds of the trailer, we see the all too familiar “millions of years ago” caption. As brief as the first trailer may be, they have made it clear that this family film is going to ignore science and continue to try to ingrain in the minds of children this idea that dinosaurs were extinct millions of years before the first human-like species appeared.
Of course, real science and history are both overwhelmingly in favor of humans and dinosaurs living together. We have drawings, written accounts, carvings, and other descriptions of dinosaurs from ancient (and not-so-ancient) cultures that have lived all over the planet. Archaeologists continue to find dinosaur bones with soft tissue in them, something that just couldn’t happen if they all died 65 million years ago (check out Dr. Brad Harrub’s new DVD for more on that subject). But none of that scientific and historical evidence matters, because, as Adolf Hitler so accurately said, ““If you tell a big enough lie and tell it frequently enough, it will be believed.” That, of course, even involves lying to children through entertainment.
I’m not telling you to boycott the movie or Disney/Pixar… but what I am saying is that Christian parents have to be constantly vigilant about what they let their children watch. Kids love dinosaurs, and the people who make toys, coloring books, backpacks, and every other kid accessory know that. Many parents will think this movie is harmless, but the seeds of doubt are planted incredibly early. By the time churches get around to teaching Christian evidences (if they do at all), it’s usually in the teenage years, meaning most children have had upwards of 10 years of propaganda thrown at them before they hear the solid truth about science and God’s word.
On the other hand, I’m sure many parents will refuse to take their children to see this movie because it promotes evolution… but then they won’t see any problem letting their children learn about evolution or homosexuality from books, tv, or their schools. We have to make sure we’re being consistent in what we teach and what we allow children to be taught. Parents weren’t just given the task of clothing and feeding their children. They’re also charged with defending and developing their children’s souls. If that means saying no to a popular movie, so be it. If that means exploring alternative means of education or keeping watch over everything their children are being taught day in and day out, no matter how tedious and tiresome it might become, so be it.
There’s a war going on for the hearts, minds, and souls of children, even among things as seemingly innocent as a one minute movie trailer. Stay on guard.

A Change I Have to Make 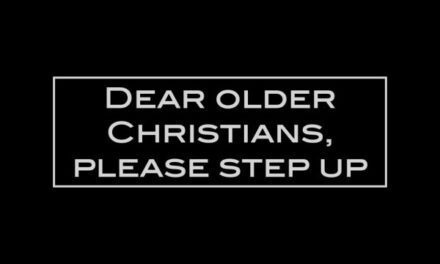 To the young exchanging Christianity for activism